Whilst trolling through my archives, I realized I had begun an Avengers project and stopped after one post. We can’t have that, now can we?

Unless you’ve been living under an enormous rock, you are aware of a little movie currently in theaters called The Avengers. If, for some reason, you are unaware, I am here to overturn that rock, poke you with a stick and drag you kicking & screaming out into the nerdy sunlight. (Be one of us, it’s really not as bad as it sounds.)

Anyway, this little project directed by some guy named Joss Whedon kind of went out and broke a few records. It dethroned Harry Potter and the Deathly Hallows, Part 2 by raking in $207 million domestically, this weekend alone. It also set the record for highest Saturday gross of all time ($69 million). Needless to say, that’s impressive. No one really knows what the future of this film will be. Will it continue to bring in viewers, new fans and repeat audiences alike? Or will it “Hulk-Smash” the box office for a weekend and then lose its steam? That, my friends, remains to be seen.

What’s that, you say? You haven’t seen The Avengers yet? You don’t know any of the characters, and why the hell should you even care, anyway? Or, perhaps you’ve seen them before but could still use a refresher before you & your friends assemble in theaters. You’re in luck! For the next few weeks, we’ll be taking a look at those before we arrive at the newest arrival. While it’s not exactly necessary for you to have seen all of these films before you tackle The Avengers, it may help you become familiar with the characters and general storyline.

One issue I encountered when deciding to embark on this project was discerning the order in which to write about the previous Marvel films. I could have gone in the order in which they were released in theaters. Or, I could try to piece them all together in proper chronological order, like some sort of gigantic, gamma ray infused puzzle. The problem with that method is that it’s difficult to pinpoint the exact order to follow. Sure, everything ties together, but with extra scenes, new characters/developments/etc, there are good arguments for a variety of viewing strategies.

I am skipping all of that by adhering to “Ol’ Blue Eyes”, Sinatra himself, and doing it my way. 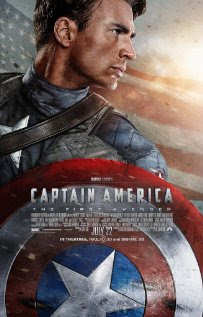 “Arrogance is not a uniquely American trait, but you do it better than most.”

Hey, DT! Convince me! So why…: Captain America: The First Avenger?

As fans of the comics will no doubt tell you, Captain America isn’t really the “first” Avenger. Still, as far as this film series is concerned, he was a hero far earlier than the others. So….he’s the oldest Avenger? In that sense, I suppose he is the first. (Really, don’t drive yourself crazy trying to work this out in your head.) It’s not that important, unless you’re “Comic-Book Guy” or Dr. Sheldon Cooper.

Anyway, the year is 1942 and World War II is raging on. And Johann Schmidt (Hugo Weaving), Nazi officer & head of HYDRA (the Nazi’s advanced weaponry branch) is doing some raging of his own. Schmidt’s on the hunt for The Tesseract, a cosmic cube considered to be the “crown jewel of Odin’s treasure room (Hmm…Odin….).” A device of this unlimited power would allow Schmidt, also known as “The Red Skull”, to destroy his enemies and reshape the world in his own, twisted, red image.

Despite these bleak circumstances, all is not lost. After all, we have this guy:

Enter Steve Rogers (Chris Evans), of Brooklyn, NY.  Rogers is me, you, all of us. He’s the everyman: a scrappy little guy with a big heart who can’t walk away when there’s a wrong that needs to be righted. He hates bullies and can’t stand to sit around and watch as the Nazis throw their weight around Europe. The only problem is, well, look at him. He’s…small. He’s frail, and he has a list of medical ailments that’s taller than he is. Suffice it to say, the Army won’t take him.

A chance encounter with Dr. Abraham Erskine (Stanley Tucci), a defected German scientist on the run from The Red Skull, allows Rogers to enter the Army and grants him a shot at taking part in a top-secret experiment. First, however, Rogers has to convince Colonel Chester Phillips (the ever-gruff Tommy Lee Jones) and the lovely but tough-as-nails British agent Peggy Carter (Hayley Atwell) that he is truly the man for the job.

If Rogers can prove that little guys belong on the front-lines as well, Erskine is willing to let him test a “Super Soldier” formula that can amplify both the physical abilities and inner qualities of its users. Erskine warns Rogers that The Red Skull himself had undergone the same experiment, to disastrous results. As long as Rogers remains a good person with respect for the power he wields, he should be OK. If not, Schmidt is there to serve as a reminder of what the formula can do to those with evil in their hearts. Rogers, determined to try to make a difference in any way he can, decides to go through with it….

Problem solved, right? Not quite. Rogers will still have to fight to find his place in the world and come to grips with his new-found power and responsibility. The man who was never physically strong enough to fight for his country will need to stand up and answer the bell if he’s going to have a chance of stopping The Red Skull’s onslaught and halting the Nazis in their tracks. He’ll grab some new gear and find some new allies along the way, including a ragtag group of commandos and wealthy playboy arms provider Howard Stark (Hmm…Stark…). But will it be enough to sever all of HYDRA’s heads? There’s only one way to find out!

Now that you’re here, check out:

The process used to make Chris Evans look like a 90lb weakling. Rather than select a skinnier different actor to portray Steve Rogers in his…leaner years, director Joe Johnston decided to film the scenes with Evans and then digitally place his head onto a smaller body. In other words, this:

It was undoubtedly a bold move, and one that has its strengths and weaknesses. For one thing, it helps to know that Rogers is still Rogers, whether he looks like a toothpick or next month’s “Muscle & Fitness” cover model. It definitely makes the transformation look much more effective. On the other hand, skinny Rodgers still seems a bit fake to me, almost as if it’s not even a real body. Either way, it’s enough to make you wish for your own Super Soldier formula!

Who brings a DVD to a gunfight? You do (If it’s Captain America):

The results of Rogers’ experiment have put him on a higher platform than the rest of his fellow humans. His strength, speed and agility are beyond that of normal humans. He may not go around blasting energy beams or summoning lightning bolts like some of his fellow superheroes but, if he punches you, you’re going to feel it in the morning. He can heal and recover from injuries quickly, which certainly comes in handy in his line of work. Despite all this, he’s still a human being. Which means, he can be killed.

Fortunately, he comes equipped with his trademark shield. Made from Vibranium (a practically indestructible metal unique to the Marvel universe), Cap’s shield is able to deflect bullets and energy but can also absorb pretty much any form of vibration. In addition to its defensive properties, Captain America can also use the shield as a weapon, often hurling it across the battlefield or bashing some poor soul’s lights out with it. For some reason, it often returns like a boomerang when thrown, either with someone’s teeth stuck to it or with a fresh beer from the kitchen refrigerator. (Hey, the man’s a patriot, but he’s not a teetotaler.)

Something else to note with the good Captain: he’s an inspirational leader, a terrific motivator and a strong military mind. There’s definitely something to be said for a man who goes from zero to hero overnight and still manages to remain dedicated, loyal and humble. Although some characters in the Marvel universe may regard him as a flag waving boy scout, it’s difficult not to respect the man and what he stands for. It’s easy to see why, when Captain America charges into battle, his friends follow his lead. That is something that can’t be created in a weapons lab or injected through a syringe. It comes from within the beating heart of a champion.

This is the end…

So, if you are planning to assemble for The Avengers, why not start with their leader, Captain America? Captain America will provide a basic introduction to Steve Rogers, HYDRA, The Tesseract, the Stark family (No, not House Stark!) and the general lay of the land. You may even see a surprise or two. It’s a pretty solid superhero film that strays in a few areas, but ultimately does a fine job of recreating such a vintage time period and the serial-like adventures of America’s greatest hero. And that, my friends, is worth saluting.

Final Rating: 3 out of 4 Everything-Proof Shields

*After watching this film, DirectingTitan raced to the recruiter’s office in the hopes that they were still accepting sickly, stick-thin, good-intentioned young people to undergo dangerous experiments. Unfortunately, those positions have been filled.*