Apparently, this was too large to post on the Yahoo league message board. So, after a brief negotiation with the operator of this site (me), we’ll be hosting the weekly recaps here. I’ll buy myself a drink later.

Just like that, Week 1 is here and gone. There were thrills. There were chills. Each week, or until I get bored, I’ll take a stab at analyzing the AoA post game matchups.

Categories to look out for:

“Painful Start”: Did you ever look at your lineup choices and ask yourself, “Why do I do this?” If you, you may already be a contender for this prestigious award.

“Brutal Benching”: Ouch. It hurts to look at those points on the bench. That’s why I’m here to remind you! 🙂

“Stroke of Genius:” Whether it’s simply an impressive move on your part or a case of Homer Simpson being “stupider like a fox”, if something stands out at me I’ll make a note of it here.

“Novelty Pick of the Week Pick”: I will try to do one of these for each match-up. Just fun here, nothing too serious.

First, an observation. I am not Bligh’s Gonna Cry. My team is The Tunnel Snakes. Please adjust your trash talk accordingly. Moreover, definitely don’t send me trash talk memes before the game is even over. You both know who you are…

Painful Start:
Doug Baldwin, already suffering from a knee mishap over the summer, injured his other knee and contributed a whopping 0 points to the Deep State Dynamos. Here is hoping for a speedy recovery, because I drafted him in a different league.

Brutal Benching:
Ted Ginn Jr. Ted Ginn Jr?! Yes, he’s still around. And left 17 points on the bench for Bligh’s Gonna Cry. (Side note: it’s fun when I look at a guy who’s been in the league forever, assume he’s half dead, and then find out he’s younger than I am. It’s very fun when that happens, which is frequently.)

Benedict Arnold Traitorous Pick of the Week:
Dynamos sold his soul to the devil and started the Chicago Bears defense against his beloved Packers. I hope the 14 points and Aaron Rodgers injury help you sleep at night, you son of a bitch.

Result:
The Deep State Dynamos infiltrate their way to 1-0.
Bligh’s Gonna Cry sobs over a 0-1 start.

I am heading up an investigation to see if Russia is responsible for SACed drafting 5 QBs. So far all signs point to yes or, should I say, Da?

Painful Start:
Raise your hand if your running back had less rushing yards (17) than his team’s QB (77).
Hello, Duke Johnson Jr! Out of all the quarterbacks SACed kept, maybe Tyrod Taylor should have been one of them?

Brutal Benching:
Nothing to see here this week, move along.

Defense is Optional Pick of the Week:
Anyone who started most of the Buccaneers or Saints offenses. The defenses must have had diarrhea or something.

The Brice is Right v Waterboys

Waterboys are coming off back to back Avengers of Avenging championship seasons. Where is Thanos when you need him? If Waterboys wins 3 years in a row, I am moving to Canada.

Painful Start:
This week, Deshaun Watson struggled out of the gate. Is this a sign of a collapse to come, or just a bit of predicted regression? Only time will tell, but thanks for the 12 points for Brice.

Brutal Benching:
Adrian Peterson showed he still has gas in the tank to tune of 21 points on Brice’s bench.
With that said, fuck Adrian Peterson, his 21 points, and the horse he rode in on.

Stroke of Genius:
Our first Stroke of Genius this year goes to The Brice is Right for plugging in Tyreek Hill. It’s a good sign when your team’s first touch of the season is a punt return TD. It’s a better sign when you then score two more TDs. 38 points is nothing to sneeze at. Imagine if this league rewarded return yardage. The commissioner must be a real asshole.

Why Does God Hate Tight Ends Pick of the Week:
Both Delanie Walker and Greg Olsen suffered some painful injuries. As of this writing, Walker is on Injured Reserve and Olsen is on crutches.

Result:
The Waterboys hit the showers with a 1-0 record.
The Brice is Right comes on down to 0-1.

Who wins when a ninja fights a samurai? Everyone else.

Painful Start:
LeSean McCoy can’t do much running when his QB is Nathan Peterman and his team loses 47-3. That is 100 total yards of Buffalo offense and a shady 2 points for Bitsy.

Brutal Benching:
What is it with ex-Eagles this week? Desean Jackson left 146 receiving yards and 2 TDs on the bench for the Wookiee, but in fairness, who really saw that coming?

This is the Game that Does Not End Pick of the Week:
Kenny Stills had 24 points to offer Ninja Bitsy, but that game took so damn long I think they made you listen to a timeshare offer first. 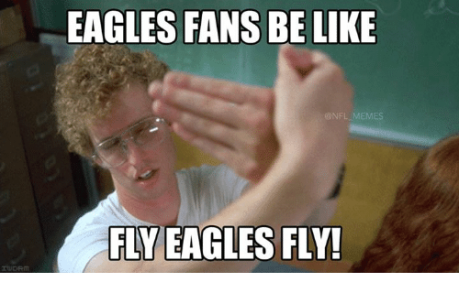 Longtime league members go head to head for our amusement.

Painful Start:
Remember when I gave everyone who didn’t want to play this season a chance to back out and only one person left? It wasn’t Slap and Pickle, who got 0 points from a busted Sony Michel. And somehow Michel was still better than the -3 points Slap got from the Chargers defense.

Brutal Benching:
I can’t be too hard on Fly Eagles Fly for leaving Cobb on the bench this week. No one predicted Aaron Rodgers’ $134m knee would make a bigger Week 1 story than Colin Kaepernick’s. Hiyoooo, try the veal. I will be here until I die.

I Don’t Really have a Pick of the Week Pick:
Nothing really blew me away this week. Hey Slap, you suck! 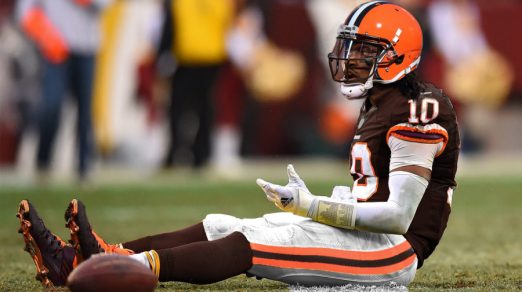 The battle of the auto drafters? I think Joski popped in for a couple picks at least. Welcome to new AoA member Assume the Position.

Painful Start:
There were many painful starts here. Seriously, just look at them. HOW AM I SUPPOSED TO PICK JUST ONE? Fine, I’ll throw a dart. I’m throwing a dart. I hit Derrick Henry with the dart. There is blood. Sorry, Derrick.

Brutal Benching:
Alex Smith likes throwing to Chris Thompson, but it’s really only effective when Thompson is in your lineup and not on the bench. I know he left off last season on one leg but c’mon now.

Why is RGIII on your Roster Pick of the Week:
RGIII is currently owned in 0% of Yahoo leagues. Why did you add him, Assume?

Result:
Assume the Position assumes a 1-0 record.
Joski’s Yoskis starts out 0-1. What is a yoski, anyway?

At last, the moment we’ve all been waiting for!

Brutal Benching:
Nothing really stands out here. Dave’s Brutal Bench is looking a bit rough, with two people who can’t play yet and another guy who is suspended for 4 weeks.

Le’Veon Bell Whoooooo Pick of the Week:
Nothing to celebrate here. I drafted James Conner with a late pick like every Bell owner should have done. (I even took him in some other leagues so the Bell owner couldn’t draft him) It remains to be seen if Mr. Bell continues his holdout, but for Week 1 purposes, I am a happy camper.

Result:
Dave’s Dandy Team starts at 1-0 and makes an enemy for life of the commissioner.
The Tunnel Snakes clog the league toilet at 0-1.

That’s all folks! See you next week for more of this shit, I guess.